Kazakh artists have appropriated the color red as a symbol for the vitality of life in their traditional art for millennia. This field of red poppies is in Ordabasy, Kazakhstan the place where the three major Juz or tribes came together to unify Kazakhstan in 1726 under the leadership of Abulkhair.

To order a print visit my online store: EastepStore@WayneEastep.com

Explore a larger collection of images at my website: WayneEastep.com

Field of poppies at the historical site of Ordabasy, Kazakhstan.

Happy winter solstice. The long days of darkness have passed. Now each day will bring more light and in time new life; grapes for wine, fresh arugula for salads, wheat for bread, raspberries for dessert…..

I turn to nature and celebrate the life and abundance that the light gives us. I hope to use each day to cultivate love, harmony, and beauty.

A portrait should represent your likeness and evoke your emotional energy.

That is my goal when making your portrait.

I  think of your portrait as being an image representing the outside and inside of you.  A single image if made with focus and connection can be a true representation of your persona. However, no manner how successful the single image is it will not represent the whole truth of who you are because you are way too complex.  At the moment the photograph is made you may be open and the still image can communicate that openness.  You may also be quiet, cautious, and have wit, chances are the single picture will not communicate all of those aspects of your persona.  When making your portrait I will guide you to being present in the moment and not get concerned about trying to show all the aspects of your persona.  Let’s be satisfied with getting one image that reflects who you are.

When you open your spirit and allow your energy to move and I focus my attention and spirit we can connect in 125th of a second to create an image that communicates your persona.

My Portrait Studio is located in downtown Sarasota at 1338 Central Avenue, Sarasota, FL 34236.  I’ve put a lot of intention into creating a space that is warm, comfortable and safe with the goal that you will feel good about having your portrait made.  I look forward to working with you to “capture” your persona.

I traveled 3,295 km (2,047 miles) from Almaty, Kazakhstan to the edge of the Caspian sea to make this image of an ancient Zoroastrian temple.  The rituals are no longer practiced there so I brought candles to light the inside and show respect for their practice of using fire as a focal point of Zoroastrian rituals.

“Zoroastrian places of worship are sometimes called fire temples. Each fire temple contains an altar with an eternal flame that burns continuously and is never extinguished.”

Zoroastrianism is one of the world’s oldest monotheistic religions. It was founded by the Prophet Zoroaster (or Zarathustra) in ancient Iran approximately 3500 years ago.

For 1000 years Zoroastrianism was one of the most powerful religions in the world. It was the official religion of Persia (Iran) from 600 BCE to 650 CE.

While I was making this image a woman appeared at the entrance, came in and announced that she and her family were there to honor a relative who had died and was buried nearby in what the Kazakh’s call “the city of the dead”.  She invited me to join them in honoring her relative. She turned and walked out.

A print of this image will be shown this Saturday, June 30, 2018, 11 am to 4 pm as part of an exhibit exploring the concept of “Art within Architecture”.

If you are unable to come to the studio Saturday but would like to buy a print contact me about sizes and prices:  WayneEastep@gmail.com 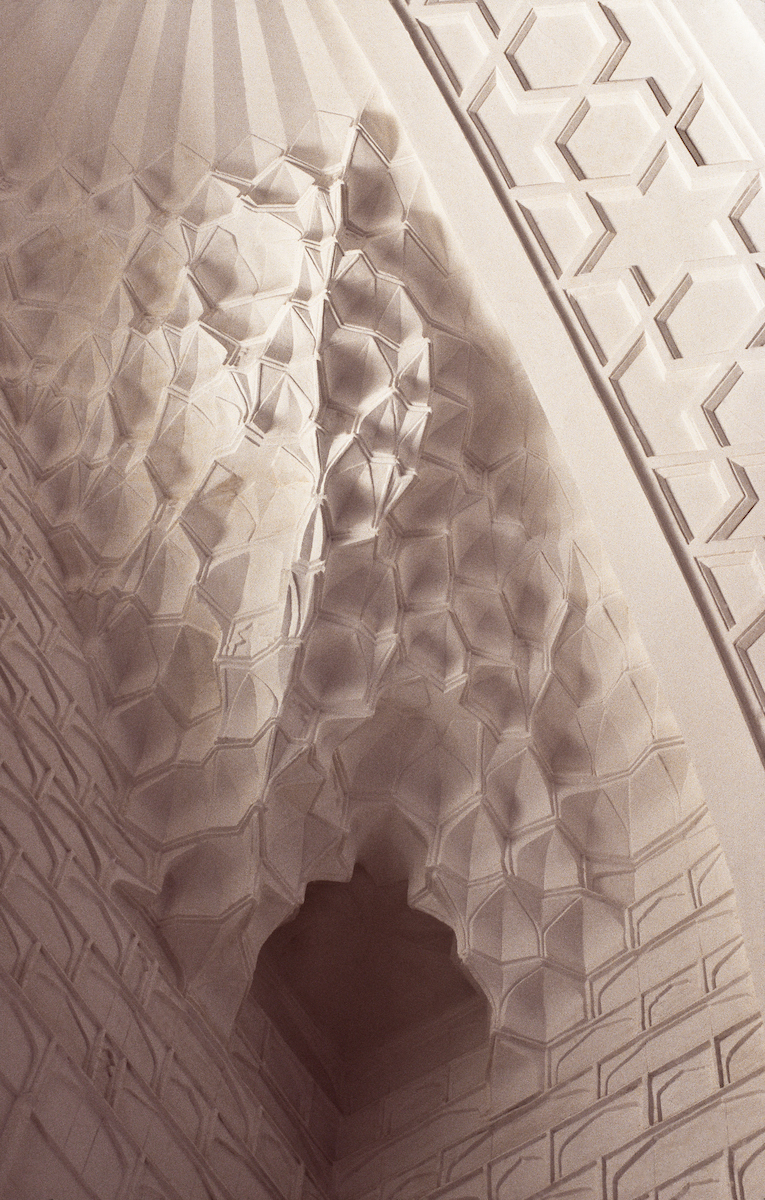 One of Central Asia’s largest domed mosques honors Khawaja Akmed Yesevi, the 12th-century Sufi mystic whose poetry and writings had a tremendous impact throughout that part of the world. It was commissioned in 1390 by Tamerlane, the Turkic conqueror, to honor Yesevi and serve as his mausoleum. The mosque was built in eight independent sections, which has helped it survive numerous earthquakes. the building measures 47.5 x 65.6 meters (152 x 215). Its walls are 2 meters (6.5 feet) thick and the central hall walls are 3 meters (10 feet) thick. The dome is 37.5 meters (123 feet) high and 18.2 meters (60 feet) in diameter. These elegant niche-like decorations just below the mausoleum’s dome are known as Muqarnas. They are an Islamic invention that reached a zenith around the 13th century. the delicate and soaring designs evoke Yesevi’s transcendent and complex poetry as well as the mystical ideas of Sufism. It is located in Turkestan in southern Kazakhstan.

This image will is part of the collection “Art Within Architecture” on exhibit during my open studio at Art Central this Saturday, June 30, 2018, 11 am to 4 pm.

If you’re unable to come to the opening on Saturday feel free to contact me to set up a time to come by and see the prints.  If you’re out of town but would like to buy a print write me about sizes and prices.

Yurt from Kazakhstan in Sarasota, Florida

The June 2017 Heat Index section  of Sarasota Magazine, features a story about Patti and Wayne Eastep and the Yurt which they brought from Kazakhstan to Sarasota, Florida.  Click here to read the full story.      Story in Sarasota Magazine

Kazakh Yurt which Patti and Wayne Eastep brought from Kazakhstan to Sarasota, Florida.

Wayne Eastep standing by his photograph of the Tien Shan mountain range in Kazakhstan. The Tien Shan are also know as the “Celestial Mountains.” The print is at the entrance to the exhibit “Nomads and Networks” at the Freer | Sackler Galleries of the Smithsonian, Washington, D.C.

Documentary photographer Wayne Eastep next to his print of a Steppe horse in the steppes of southern Kazakhstan. The print is part of the “Nomads & Networks” exhibit at the Arthur Sackler Gallery at the Smithsonian in Washington, D.C.

Nomads and Networks: The ancient Art and Culture of Kazakhstan

This small, sacred bronze-cast Lampion was used to burn oil and incense. A squatting horseman wears a caftan and helmet-like hat. A moveable horse figure with a bridle and plaited mane has a hole in its back for a candle or a torch. The dish is 25.5 centimeters (10 inches) in diameter and 18 centimeters (7 inches) high. It dates from the 4th to 3rd centuries B.C.

This headband of gold from the 2nd century B.C. is inlaid with Turquoise, Amandine and carved wood. Called the Kargalin Diadem, it was found in the grave of a Shaman believed to be Female. It is decorated with animals, and the central portion, which has been lost, is believed to be a tree of life. It was discovered in the mountains at Kargalin at an altitude of 2,500 meters (8,200 feet). Central State Museum, Almaty, Kazakhstan

This cast copper cauldron with ram’s head legs dated from the 5th to 3rd centuries B.C. it was found in 1912 in the Semirechye area. It stands 58.5 centimeters high (23 inches). It is 31.5 centimeters (12 inches) deep and 52 centimeters (20 inches) in diameter. Cauldrons such as this werer used to cook the meat of sacrificial animals, or at the start of seasonal events such as the spring festival of Nauriz. Central State Museum, Almaty, Kazkhstan

The Exhibition has been organized by the Institute for the Study of the Ancient World at New York University in collaboration with:

The exhibition was made possible through support of the Leon Levy Foundation.

On December 16, 1991, Kazakhstan emerged from a long and challenging period under Soviet rule.  Over the past 20 years the country has blossomed in what can be described as the Kazakh Renaissance, a demonstration of the enduring spirit of the Kazakh culture.  I celebrate this anniversary with a selection of images from the book, The Soul of Kazakhstan.  The collection  showcases Kazakhstan’s people, history, culture and land.  They will be posted on my WordPress blog over the coming days leading up to the anniversary.

A permanent library of images is available for purchase as prints or licensing  at  http://eastep.photoshelter.com/gallery/Kazakhstan/G0000xg4sBqG4LWQ/

Photographs by Wayne Eastep in the exhibit "Of Gold and Grass" Mingei Museum, San Diego, CA

Photographs by Wayne Eastep in the exhibit “Of Gold and Grass” Mingei Museum, San Diego, CA

A stamped and engraved gold plaque on the Golden Warrior’s headdress features mountains and a snow leopard. He was a 5th century B.C. Saka chieftain

“While researching for the book The Soul of Kazakhstan in the New York Public Library, I came across a letter Natllya Sedova, Leon Trotsky’s wife, wrote home while exiled in Almaty. She exclaimed about the beauty of a late spring snow blanketing the tulips. As good fortune would have it, my apartment was across from where the Trotskys lived. On a spring day in April, I was treated to the same beautiful sight” – W.E.

It took Kaineke Zarykpai-Kyzy Kanapyanova two years to create this embroidered-felt Tuskiiz. She made it as a wedding gift for her son, Nurgazy, in 1973. When I told her she was a master like the artists in Japan called “National Treasurers,” she said, “Thank you.” After a pause she asked, “Will you put that in your book?”

The opening at the top of a Kazakh yurt is called a Shangiraq. The circle represents the circle of life and the cross marks the cardinal points.