Portrait made in a nutmeg factory in Granada for Nautica fashion campaign.

A portrait should represent your likeness and evoke your emotional energy.

That is my goal when making your portrait.

I  think of your portrait as being an image representing the outside and inside of you.  A single image if made with focus and connection can be a true representation of your persona. However, no manner how successful the single image is it will not represent the whole truth of who you are because you are way too complex.  At the moment the photograph is made you may be open and the still image can communicate that openness.  You may also be quiet, cautious, and have wit, chances are the single picture will not communicate all of those aspects of your persona.  When making your portrait I will guide you to being present in the moment and not get concerned about trying to show all the aspects of your persona.  Let’s be satisfied with getting one image that reflects who you are.

When you open your spirit and allow your energy to move and I focus my attention and spirit we can connect in 125th of a second to create an image that communicates your persona.

My Portrait Studio is located in downtown Sarasota at 1338 Central Avenue, Sarasota, FL 34236.  I’ve put a lot of intention into creating a space that is warm, comfortable and safe with the goal that you will feel good about having your portrait made.  I look forward to working with you to “capture” your persona.

So what’s cooking in the kitchen?

This ad features Paris-born designer Robert Couturier and his partner Jeffrey Morgan at their elegant Connecticut home filled with centuries of antique treasures.  It is the most recent of 16 ads I’ve shot for the GE-Monogram brand campaign, “So what’s cooking in the kitchen?”  The theme of the campaign features people whose personal and professional lives exemplify style.  Working on projects like this is one of the reasons I do lifestyle advertising photography.  In addition to meeting and working with superbly talented people like Robert and Jeffrey, I get to see and photograph beautiful and fascinating places I normally would not have access to.  Another great benefit is the fabulous food.

If you are privileged as I am to work on exceptional projects like this, you’ll acknowledge that the ad only succeeds if the client supports the concept completely.  Paul Klein from GE-Monogram is such a client. The creatives at the agency must have a clear idea grounded in the uniqueness of the product—it’s all about the idea.  Bill and Sheila    McCaffery of The Creative Farm exemplify an approach to advertising that focuses on a clear idea.  I turn the idea into an image, but it’s my team who make it happen.  William DeVincenzo, “D,”  is my right hand man who makes sure every detail is taken care of.  On jobs like these it’s all about the details. 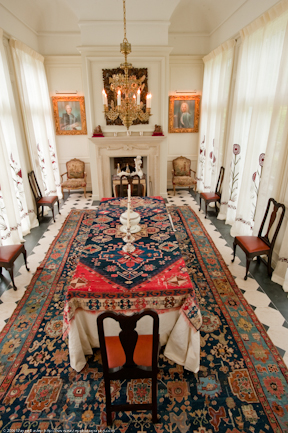 To see other images I’ve shot in this campaign visit:  http://eastep.photoshelter.com/gallery/Lifestyle/G0000OyRO5rOs6OA/