This eucalyptus tree has died and still it has beauty reminding us that at each stage of existence there is uniqueness and beauty.
Cyclamen.
IPhone photo. Join my iPhone Camera course starting May 8 to learn how to take charge of your smartphone camera and make the images you see with your mind’s eye. Since posting this image I’ve had inquiries about what’s going on with this image. It’s simple, while making the images of the yellow wall I noticed my shadow. It reminded me of petroglyphs I’ve seen in Arabia and Kazakhstan where people thousands of years ago carved images similar to this shadow on rock faces. #iphone #iphonecamera #iphonephotography
Same subject as the previous image, photographed tonight with my iPhone Camera. Join me next Saturday May 8 to learn how to take creative control of your iPhone camera and create the images you observe with your mind’s eye. #iPhoneCamera #teachingiphonecamera #teachingphotography
One spot left for the May iPhone Camera course starting next Saturday May 8. Image by Wayne EASTEP iPhone Camera. #iphonecamera #appleiphone camera #smartphonecamera #teachingphotography #sarasotaphotography
Lisa King a student in my April iPhone Camera course made this image in Portrait mode using Stage Lighting effect. #iphone #shotoniphone #appleiphonecamera # teaching photography #teachingiphonecamera #sarasotaphotographer #sarasotaphotography

1971:  The Creation, a book of photographs by Ernst Haas, transfixes me. The images are part meditation and part creative expression. After studying the photographs for days, I became aware of a new way of seeing.  These images go beyond the descriptive to explore a subjects essence.  THE CREATION cover is less about the abalone shell and more a metaphor for the universe. The shapes and colors suggest the swirl of planets and stars.  Having an image trigger associations like this has never happened for me before.  Ernst’s images plant the seed in my imagination of merging poetry and pictures, and eventually draw me to photography as a profession.

Five years passed before I took action to become a photographer.  The path I chose was an apprenticeship with Burt Glinn at Magnum.  During this time I had the honor of meeting Ernst Haas and over the next two years came to discover his grace, style and humanness.  When I started work on my first book, Bedouin, Ernst generously shared the following advice with me and that guidance proved to be sound and  I’ve continued to follow.

Read poems by children from the culture you’re studying, look at their drawings. Children show us a world drawn from their intuition.  Do not make an outline because it will become a structure that will define your process.  Simply start working and making photographs.  People around you will say, “Oh, you’re interested in that, well let me show you this.”  They will develop the story and it will have a natural progression.  Make sure you wear comfortable shoes.  If your feet hurt it will distract you from the experience. 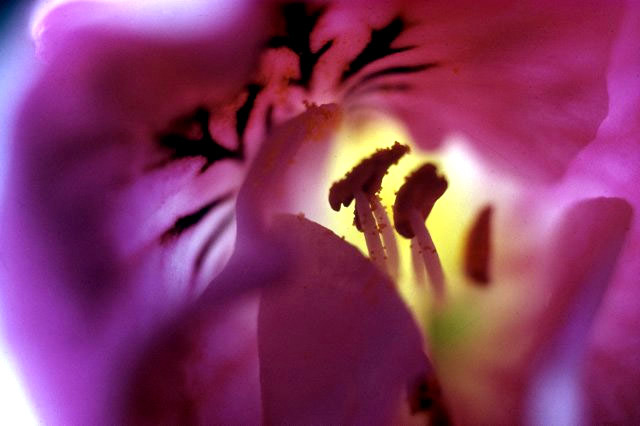 Todd Weinstein, Ernst’s longtime assistant, told me a story about preparing contacts from Ernst’s photographs of World War II refugees.  Todd was making contact sheets from the two and quarter negatives and noticed he was placing one frame at a time on the contact frame and not a strip with three or four frames as is normal.  He asked Ernst why there was only one frame and where the rest of the images were.  Ernst answered,  “That’s all there is.  We couldn’t take a lot with us (when moving from the war front to safety) so I selected the one I thought best, cut it out and left the rest behind.”

Ernst had a creative courage that enabled him to trust his instincts.  He would embark on a project without a client funding the work.  There would be a basic idea, but no production plan or outline organizing the subjects.  He trusted the idea that the subject would show itself and share with him what needed understood.  Rather than imposing a preconceived idea he was open to discovery.

Jay Maisel shared with me Ernst’s admonition, “One should move around freely and have fun, and if it isn’t fun then don’t bother.”

The style of Ernst’s work reveals a sensitive and intimate humanity.  His images were not simply documents of a person, place or object.  He photographed in a way that revealed humanity in a gesture or glance.  The essence of beauty is expressed in his photographs of a flower. When photographing a storm on the ocean he is putting us in touch with the power of nature.  His study of an abalone shell is not an image of natural history; it is a meditation on the mystery of creation.

Ernst Haas gave us an example of what we can create if we trust that fragile and powerful place within our mind called intuition.  We see best when we are open and responsive to the wonder of the world, as we were as children.  His example calls us to stop doing so much and start being.  Simply be still and see.  When we are in that frame of mind the subject will open and show something of itself to us.  What we learn will inform our images and what we create will be worth sharing.

To see more images by Ernst and learn about his life and contribution to photography visit the ERNST HAAS ESTATE  http://www.ernst-haas.com/